Here are a few things that can impact how much a professional Santa Claus charges. 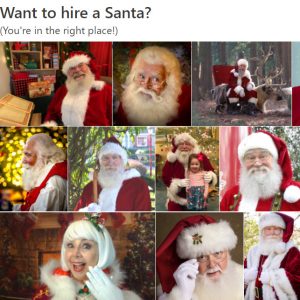 A Professional Santa Claus Entertainer – A Santa Claus skilled in magic, or a singer, musician, pro storyteller, etc. will likely charge a premium.

A Professional Santa Claus Model –  A Santa Claus that has ‘model good looks’ as Santa 🙂 will likely charge a premium.  Many professional photographers are very discerning in their Santa selection… and they pay a premium to get just what they’re looking for.

A Professional Santa Claus Actor – The rate of pay for Santa Claus acting roles varies widely depending on the location, whether it’s a union acting job or a non-union job. The low end is in the $500 – $750 range, the high-end, which are SAG-AFTRA union commercials and movies can get into the tens of thousands of dollars depending on the residuals. Residuals are determined by where and how frequently a commercial airs, the ‘box office’, and other releases of a movie.

Santa Claus as a Brand Ambassador – Santa Claus can make a wonderful Brand Ambassador for a wide variety of companies. I have appeared in many YouTube & social media videos as a Santa Claus spokesperson… it’s a lot of fun and a great way to capture attention during the holiday season and all year round. Like Santa Claus actors the rate of pay for Santa Claus Brand Ambassadors varies widely. Some of your members have had very limited activities for a short period of time and others have made many appearances, videos, interviews, etc. On the very low-end think in terms of $1,000  to $2,000, this can range up to $60,000 & more.

Santa Claus on Zoom – Virtual visits exploded in 2020 and many people discovered something they hadn’t expected, visiting Santa virtually is actually a lot of fun. I have conducted thousands of virtual visits, some for families, some for company parties, a few for US Embassy staff, and several for members of Special Need organizations. These visits typically range from $50 to $250 depending on the day & time and the length of the visit. You can sess an example here: https://santa-claus-virtual-visits.com/

Santa Claus Video Messages – Sometimes a video message from Santa Claus is the perfect way to bring Santa Claus to people. I have made videos for board meetings, sales meetings, company meetings & parties, city council meetings, various clubs & organizations, schools ranging from pre-school to universities, hospital patients, spouses and girlfriends… and of course for children, often as a way to announce ‘experience’ gifts like visits to theme parks, cruises, ski trips, etc. The cost for these types of videos is typically between $50 & $500 depending on the script, post-production work, etc.

Here are some additional things to consider…

While many of us who portray Santa see what we do as a calling, something we are just destined to do at this stage of our lives, it is important to remember that most of us Santa Claus portrayal artists own & operate our own small seasonal businesses.

The income produced by these small businesses must, of course, cover the operating expenses like our Santa wardrobe, insurance, training, advertising, travel, taxes, etc. The profits, if any, are often being used to supplement a fixed income. So while most Santa Claus portrayal artists LOVE “being” Santa most feel that they must be ‘businesslike’ in operating their small businesses.

Another thing that impacts how much a professional Santa Claus charges is the ‘Santa Season’ itself. Nearly all Santa Claus appearances happen during the 4 or 5 weeks from mid-November through Christmas Day. While the Santa Claus season is somewhat longer for Santas who appear in retail locations… still, when all is said and done, the season is very short. As you can imagine, during those 4 to 6 weeks demand for Santa is high and it has been growing each year.

While Santa can magically cover a lot of ground quickly on Christmas Eve… the rest of the time he’s limited by the laws of physics, meaning Santa Claus can only be at one place at a time so those popular Friday night & weekend time slots book-up early, in some cases VERY early with Santa having standing appearances on his calendar year after year.

Questions To Ask Before Hiring a Professional Santa Claus:

Get very clear about the traits/skills that are most desirable for the Santa at your event… sometimes the difference between a $250 Santa & a $350 Santa that can provide exactly what you’re looking for can have a significant impact on your event… for other events, a lower-priced Santa will work just fine.

Because of the high demand and very limited availability most professional Santa Claus portrayal artists charge more than some other on-location performers, like clowns, superheroes, balloon twisters, etc.

Another thing that can impact how much you pay for a Santa Claus or your party or event is a ‘middleman’, ‘booking agent’, or ‘temp agency’. These intermediaries often charge a fee equivalent to 50% to 100% of what Santa is paid. If you’re considering using an agency you may want to inquire as to how much the Santa Claus portrayal artist will actually receive. As of this writing, February 2022, the booking service fee for the Worldwide Santa Claus Network is 23% is an additional 23% on top of what the client pays the Santa. So if you pay the Santa $200 you would also pay us $46.

I suggest you start looking for a Santa for your event by September, earlier if possible. To have us help in your search for the perfect Santa Claus for your event complete the form here: https://worldwide-santa-claus-network.com/santa-wanted/

Background Checks & Insurance – Many Santa & Mrs. Claus portrayal artisits carry liability insurance and are willing to have their background checked, and or be drug tested if required.

Many Santas also have special pricing for Not-For-Profit organizations as well as for those with Special Needs. Be sure to ask about this.

‘Santa’ Ed Taylor has been portraying Santa Claus since 2003. In addition to many appearances in parades & Tree Lighting ceremonies and hundreds of home & company parties, Santa Ed has also appeared in dozens of TV commercials, shows, a TV Special, and even a few Christmas movies. Santa Ed is also the founder of the Worldwide Santa Claus Network, an educational & fellowship network of nearly 5,000 Santa & Mrs. Claus portrayal artists. https://santaed.com/

The WSCN is also a tremendous resource for anyone involved in planning a holiday party or parade, tree lighting ceremony, or simply interested in having Santa & or Mrs. Claus or Mrs. Claus appear at anything from a small event to a season-long engagement. https://worldwide-santa-claus-network.com/

1 thought on “How Much Does it Cost to Hire a Santa Claus?”