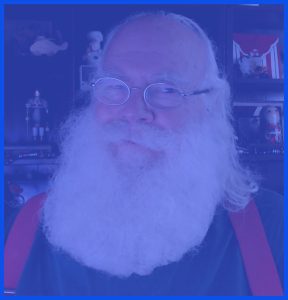 A simple Google search will confirm that this is a VERY REAL thing, and it affects many of us Santa Claus portrayal artists; in fact, I experienced every postseason for several years.

Here’s what it is & what to do about it.

Every December 25th, 26th, 27th… I see many social media posts by Santa Claus portrayal artists saying how difficult it is “going from Santa Claus back to my regular self.” They talk about how busy they have been for the past month and how many smiles they brought to faces, young & old… and now it’s over, and not just over for a day or a week… but over for 10 or 11 MONTHS!

So the good news is that it’s very normal and common to have these feelings… and there are things we can do to get over them quickly… in fact, writing this at 5:30 AM on Christmas morning… my last appearance for the season was 12 hours ago. My wife is sleeping, and we won’t be going over to the kid’s & grandkids’ house for several hours; writing this is hopefully beneficial for you, and it’s definitely therapeutic for me.

About 10 years ago, I discovered that I could hold these post-show blues at bay if I would immediately get busy looking for ways to improve my Claus portrayal. I would think back on each of the appearances I made during the season and think about things that I could have done, or just things, in general, that could have improved each appearance…, and I made notes, LOTS of notes.

This alone really helped… it was like I had a purpose during these days just after Christmas.

I also began hosting “Debrief Sessions” for Santa & Mrs. Claus portrayal artists every January. These, too, were VERY helpful, and not just for me… hundreds of other Claus portrayers have reported that preparing for and attending these sessions have helped them overcome their post-season depression.

Identifying your purpose for your portraying Santa, and I don’t mean for the money; for Claus portrayers who get paid, the money is a result of your portrayal… but hopefully not the purpose for it.

Your purpose may be to bring smiles to people, spread a worthy message, encourage good behavior, entertain, perform, stretch your comfort Zone, have an outside activity, etc., etc., etc. Once you are crystal clear about WHY you portray Santa or Mrs. Claus it gets easy to find reasons to get better at it… and once you have a reason to get better… you have something to do on December 26th, 27th, 28th and on into January… and throughout the year.

By the way, the fact that you’re feeling this way is kind of a good thing. It means you really enjoy what you do!

Many Claus portrayal artists have reported that staying in touch with other Claus portrayers throughout the year is also very helpful; in fact, many of our Santa School attendees report that our classes & fellowship sessions every month keep their spirits high all year round.