There are primarily 2 different types of Santa Claus actors.

I’m an example of a Santa Claus who also acts.

After many years of being a “Santa Claus Portrayal Artist” I tried my hand at being an actor who specializes in play Santa Claus, first in TV & Internet commercials and later in TV shows & movies.

I’m not alone, there are thousands of Santa Claus Portrayal Artists across the country and around the world… and 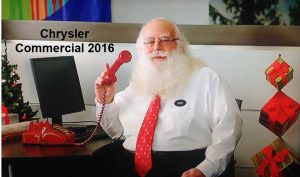 several hundred of them have also crossed over into acting.

Santa Claus actors in Hollywood, Los Angeles, New York, Atlanta, Dallas, Vancouver, Toronto, Canada, and in many other cities across the US & Canada are members of our Worldwide Santa Claus Network.

If you’re a Santa Claus interested in acting, let me know and I will get you information about our coaching program.

If you’re interested in casting an authentic Santa Claus in any type of production, anywhere worldwide, contact me. With nearly 3,500 active members and a reach that extends worldwide it’s very likely that I could get you several auditions in very short order.