The Bicentennial of The Modern American Santa Claus with Flying Reindeer

Did you know that 2021 is the Bicentennial of The Modern American Santa Claus with Flying Reindeer?

My discussion with Tom was fascinating. He’s a retired attorney with a huge collection of Santa Claus figurines and a passion for all things Santa-related. 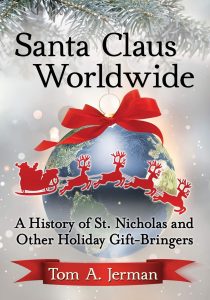 and Other Holiday Gift Bringers, a comprehensive history of the world’s midwinter gift-givers.

Santa Claus Worldwide is the first legitimate history of Santa Claus in more than a decade, and the first history in more than a hundred years to provide a comprehensive look at the world’s midwinter gift-givers, showcasing the extreme diversity in their depictions as well as the many traits and functions these characters share.

During our call tom told me about “The Children’s Friend”, (see https://en.wikipedia.org/wiki/Old_Santeclaus_with_Much_Delight) an 1821 children’s book that created the original version of the modern-day a bearded gift-giver who rode a sleigh pulled by flying reindeer, entered homes through the chimney, and left presents in stockings the children had hung the night before.

What makes The Children’s Friend important is that it contains the first known visual representation of Santa Claus, his sleigh, and reindeer.

What makes the story particularly interesting is how the book “The Children’s Friend” found its way to Clement C. Moore and into his poem “A Visit from St. Nicholas”, the book we now commonly refer to as “The Night Before Christmas”.

Tom’s book is a comprehensive history of the world’s midwinter gift-givers, showcasing the extreme diversity in their depictions as well as the many traits and functions these characters share. It tracks the evolution of these figures from the tribal priests who presided over winter solstice celebrations thousands of years before the birth of Christ, to Christian notables like St. Martin and St. Nicholas, to a variety of secular figures who emerged throughout Europe following the Protestant Reformation.

Finally, it explains how the popularity of a poem about a “miniature sleigh” and “eight tiny reindeer” helped consolidate the diverse European gift-givers into an enduring tradition in which American children awake early on Christmas morning to see what Santa brought.

Although the names, appearance, attire, and gift-giving practices of the world’s winter solstice gift-givers differ greatly, they are all recognizable as Santa, the personification of the Christmas and Midwinter festivals. Despite efforts to eliminate him by groups as diverse as the Puritans of seventeenth-century New England, the Communist Party of the twentieth-century Soviet Union, and the government of Nazi Germany, Santa has survived and prospered, becoming one of the best known and most beloved figures in the world.