The Secrets of Christmas: Revealed is a FOX TV special that will air on FOX Network Monday, December 20. 8:00 PM in most areas.

On November 11, 2021 FOX sent a TV crew to my house to film a segment for this special.

In addition to filming me, they also filmed the training session we conducted on that day. I have NO IDEA how much, if any, of that training session, or of my ‘interview’ will be used in the show, but you may want to watch it or set your VCR, they’re calling it a “mockumentary” and it sounds like it will be very fun.

Here’s a brief description: The Secrets of Christmas: Revealed exposes earth-shattering revelations of how Santa Claus pulls off the most magical day of the year.

After a massive data breach results in the release of millions of secret documents revealing the confidential inner-workings and mysteries of Santa’s entire Christmas operation — from his hidden network of spying elves to Mrs. Claus’ covert role in the organization and evidence pointing to Santa’s own magical abilities.

Christmas experts, contributors, and enthusiasts examine the avalanche of data and share top-secret findings of their investigations.

As each secret is unpacked, including “How do reindeers fly?” and “What’s the line between naughty and nice?,” a gripping audience play-along is 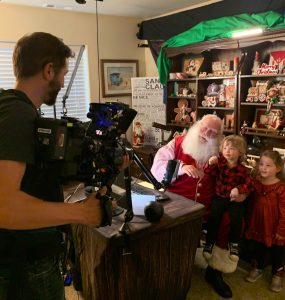 provided, layering in pieces of information that all build up to a final reveal exposing the biggest secrets of Christmas.

Again, it’s The Secrets of Christmas: Revealed. It airs on FOX Network Monday, December 20. 8:00 PM in most areas.

1 thought on “The Secrets of Christmas: Revealed FOX SPECIAL”