As a long time, ‘tech guy’ who started portraying Santa in 2003 Internet video was an obvious next step and in 2007 I made my first “Santa Video”. I’ve seen and have been a part of the evolution of virtual visits with Santa Claus, video chats & video messages since the beginning. I started by recording messages from Santa Claus on my camcorder and added Skype shortly after it was released and, over time, added Facetime & Zoom as well as YouTube, Facebook & Instagram videos.

In 2013 I became one of the founders of “Hello Santa” an iPhone video chat with Santa app. I was the face of the app making TV and public appearances, I also recruited and helped train over 100 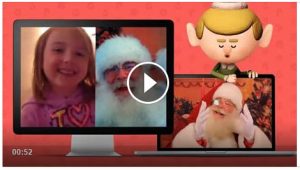 Santas. Here’s an article about the video chat app that was published in Tech Crunch shortly after we launched Hello Santa.

Every year the technology has evolved, improved, and I’ve been right there with it helping Santas increase their reach and skillset using these video technologies to help spread the Christmas spirit.

In 2019 I consulted on Santa Claus video chats with the founders of Fanmio.

Whatever the technology, having a video chat with Santa Claus is a special experience, and when the calls are video recorded you have captured a memory that is much more than a snapshot… it a voice, and the words… the gifts requested… the entire conversation with Santa.

If you could use some help developing a video chat with Santa Claus brand let me know, through my online Santa School have access to well over 3,000 professional Santa Claus portrayal artists… many of whom have already been trained in the performance aspect of video chatting.

Being a Santa Claus virtual visit / video chat consultant with years of video chat experience with, Zoom, Skype, Hello Santa, etc. and also being a member of the founding team of Hello Santa whose responsibilities included recruiting & training the Santa Claus talent as well as being the Brand Ambassador… well, all of this gives me a unique perspective that can help you avoid costly mistakes when starting a Santa Claus video chat business.